The date for the next Hereford Very British Civil War “Big Game” (“The Fall of the House of Mortimer? aka The Great Wigmore Cattle Rustle”) has now been fixed for Saturday 17th March 2018, 10am – 5pm, at our usual venue of the Burley Gate Village Hall, Herefordshire. Please check out the VBCW blog for links to details of the Hereford AVBCW campaign and the results of the Autumn 2017 Big Game (“The Last of the Summer Wye”):

This is our “Not the 5th Anniversary Game” (in fact it’s the sixth anniversary of the commencement of the campaign, but we forgot to put on a 5th Anniversary Game last year) so we hope we can welcome back anyone who has taken part in the campaign over the last few years, or anyone who wants to become involved at what promises to be a critical juncture for the future of HM Government in AVBCW Herefordshire! Please contact me if you’d like more details.

Hi everyone. I’ve been contacted by the Dice and Decks gaming club in Ross-on-Wye, who have mooted the idea of a tournament day in aid of charity.

Would this be something you’d be interested in – either as an individual or at a club level?

Is there potential (and indeed enough interested parties) to field a team to represent the club and/or Hereford?

Please let me know your thoughts!

Me and my mate Giles represented the Hereford Wargames Club at the Herefordshire Boardgamers Club charity day last Saturday by putting on a Frostgrave game.

It was great fun, so here’s a little write-up of how things transpired – http://frostgravery.blogspot.co.uk/2017/09/fee-fi-fo-fum.html

I’ve added the regular meet-up schedule for the Herefordshire Board Gamers to the gaming events calendar.

I’ve also added the next two Board Game all-dayers. All being well I’ll be attending the September day with some Frostgrave stuff.

Everyone is welcome to pop in!

Alan has sent me some great photos from the recent Flames of War game.

A German force was trying to hold open an escape road for their retreating forces in the face of a massive Allied attack trying to close it.

As for the result; the Germans just about managed to hold the road long enough for their army to escape. But it was in doubt up to the last move, so an exciting game.

THE NEXT CLUB BIG GAME

The next ‘ big’ game at Hereford Wargames Club will be an Amercian Civil War battle using Fire and Fury Rules .

We will play the first day of the battle of Chickamauga, which took place in Georgia on September 19th 1863 between the Confederate Army of Tennessee under Gen. Braxton Bragg and the Union Army of the Cumberland under Gen. William Rosecrans.

Hostilities will commence at 10.00 a.m. on Wednesday 21st June with an all-day game at The Swan, and will continue on subsequent Tuesday evening meetings until game end.

Here’s a message from our chums at the Herefordshire Board Gamers:-

“Herefordshire Board Gamers is nearly a year old, I want to invite you all to our birthday games day and also remind you I started the club to support gaming in Herefordshire so if there is anything we can do to help please let me know. (Within reason )”

A gaming pal of mine has emailed me with the following:-

My pal Neil is looking to sell his Ogre army. Some of you will remember seeing it at the multi-table Warhammer game we did in Burley Gate a few years ago.

There’s getting on for 2500 points fully painted to a standard I’d be happy with (3 characters, 31 ogres, 4 ogre cavalry, an Ironblaster and a few more models) plus some unfinished stuff.

I estimate it would cost £300 now just to buy the painted models new, but he’s open to offers.

I can sort you out with pictures if anyone is seriously interested.

If anyone is tempted, please contact me and I’ll pass your details on. 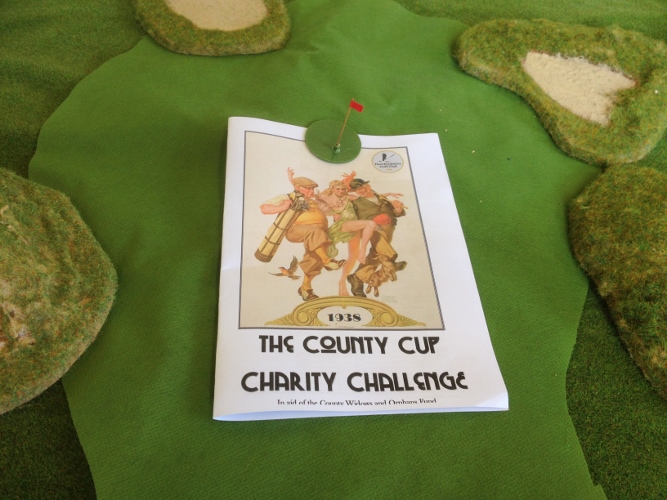 Just a quick post to link to my batrep of the VBCW game some of us played last month (having had a practice game at the club – see previous post).

This website is intended as a hub for all wargamers (and indeed boardgamers, card gamers etc.) in and around Hereford.

Our aim is to connect individuals, gaming clubs and groups – allowing like-minded gamers to get in touch and get some good games going!

Please let us know of any local groups, events etc. that you'd like to add to the site by using the 'Contact' link above.

About the Hereford Wargames Club